Thoughts from the start-up escape room. 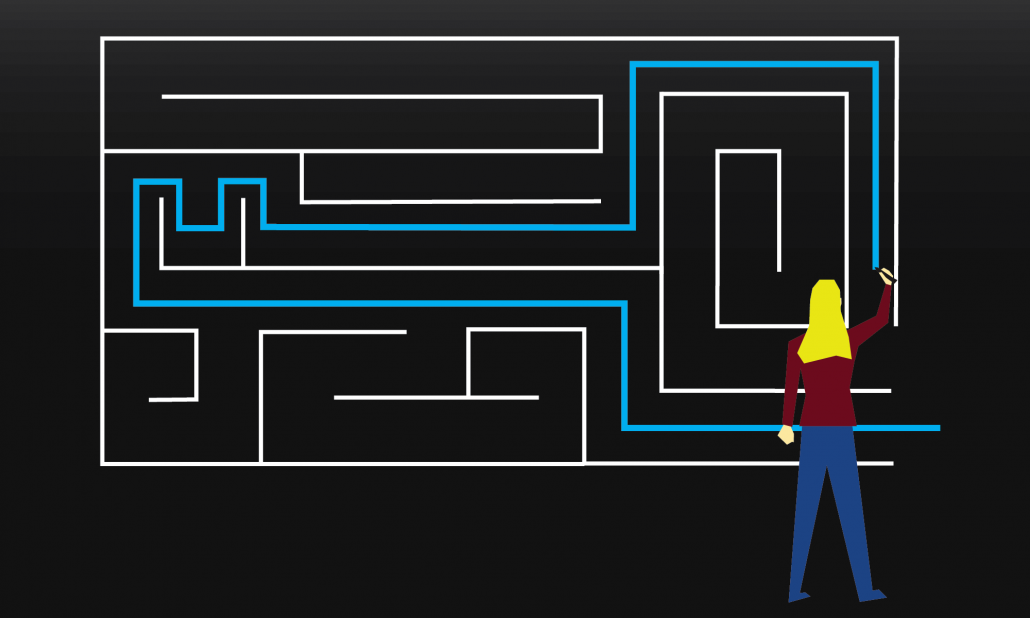 “I think that must be it,” I said, pointing at an unmarked brown storefront across the street. My husband Fernando and I were meeting with a small group to celebrate our friend Devin’s birthday. This, a start-up-themed escape room, was our first activity. We waited for a few cars and buses to pass by before jay-walking to the other side of O’Farrell. The escape room website had attempted to rebrand this section of the Tenderloin as “North SoMa.”

We entered the unassuming building, and were immediately greeted by an enthusiastic blond woman. The three of us exchanged names and handshakes. “The guy was here a minute ago,” Sheriana said, pointing at the door behind her with her thumb. “He said he’ll be right back.” We laughed, realizing Sheriana was also here for Devin’s birthday—part of our escape room experience, not the escape room experience. Irony nudged in, as we waited to spend our Saturday escaping an imaginary workplace. I examined our surroundings.

The room was sparsely furnished. There was a small desk, a wall monitor, and a small metal book shelf with a few start-up-themed books, including classics like “Creativity, Inc.” and “Re-work,” stacked on their sides.

Not much about the atmosphere said, “We’re going to lock you in a room until you solve a convoluted series of elaborate puzzles.”

A few more people from our group trickled in, including Devin, Michele, and Meg, before “the guy” came back. He was a lanky man with wavy, dirty blond hair, who wore jeans and a plain white t-shirt. He leaned forward over the desk, and rested his weight on the tips of his fingers. “How many of you have done an escape room before?” Five out of ten of us raised our hands.

“That’s a good mix,” he said, folding over to type something on his keyboard. “Let’s just go over some ground rules, then.” With a jerk of the mouse, and a loud double-click, he stood up.

The guy—we later learned his name was Brian—leaned in, slowly scanning each of our faces, and began to tell us our story. We discovered we were a team of employees at a new start-up that had just raised its first round of venture capital. One million dollars to be exact. (High-fives all around).

Our challenge was to solve clues related to design, product, dev-ops, programming, and marketing so that our start-up could launch. Not only that, but we’d have to do it before our one-hour time limit ran out.

Time is money, after all.

Brian led us into the next room. This was “the garage” where we’d be starting the escape room challenge. I paid silent homage to the garages that came before us—Jobs and Wozniak in Los Altos; Page and Brin in Menlo Park. And now: Legge and co. in North SoMa. Brian pointed out metal cubbies on the side where we could store our bags and coats. While we shoved puffy jackets into cubby walls, he explained that solving the puzzle in this room would lead us to a key that would unlock the door to our office.

“As soon as I leave, you’ll watch a short video message from your CEO,” he said, pointing up at the room’s corner monitor, which currently displayed a virgin Slack window. “Your one hour will start as soon as that message is over. I’ll be available via Slack on the ‘contractor-help’ channel if you have any questions or need any hints.” He abruptly turned and exited the room, closing the door gently behind him.

A balding white man in an untailored dark suit appeared on the screen. He, our fearless leader, spoke hesitantly, without making direct eye contact with the camera. He told us we needed to launch our start-up within the hour. “Good luck,” he said, and the video cut to black.

Almost instantly, Devin announced that he had found something in an empty red gas can in the corner. He dangled a string with numbered coins attached, while Michele unrolled a map of the United States. The state license plates hanging on the wall suddenly came into focus. After mapping out the coins from one coast to the other, we had the six-digit code to unlock the toolbox and retrieve the office key. Nine-hundred-thousand dollars to go.

We entered our office: five white desks, each with a monitor, a keyboard, and a color-coded label, button, and mini-locker. There was a white VR headset resting on a small table and a locked cabinet. The walls were bare except for a whiteboard and a few framed posters.

We split into smaller groups to explore. I walked over to the VR headset and put it on. In my viewport, I saw a minimalist recreation of the room’s five white desks. There’s nothing like a virtual reality to exactly mirror your actual reality. Meta. The desks began to flash in a constantly rotating pattern. I figured it had something to do with the color-coded buttons. Devin coordinated a few people to press the buttons at each desk station while I shouted color patterns. “Yellow, blue, blue, red, green, blue, yellow, yellow, red,” I screamed.

At first, nothing happened. I worried that my leadership had not been disruptive enough—or perhaps my team of button-pressers was not agile enough? Just then, we discovered that our efforts had unlocked the cabinet. We hauled out a bunch of t-shirts with mysterious letters on them, books with randomly high-lighted words, a giant monkey statue, and a little basketball. We each pivoted to a different small task, now in full-out sprint.

There were shouts of joy and dopamine surges every couple of minutes when something was solved. By the time we had solved all five job-related puzzles, we had fifteen minutes (or a quarter of a million dollars) to spare.

Brian entered the room to congratulate us and wrap-up our experience. “The guy who created this loved escape rooms, and he’s also the CEO of a start-up, so he’s familiar with this world,” he said, escorting us out in reverse, through the garage and back toward the front room.

Some might call Gregory Koberger, the creator of our start-up-themed escape room, a Silicon Valley tech bro.

He’s a good-looking, thirty-year-old white guy, and he’s the founder of ReadMe.io. To date, ReadMe.io has raised a total of 1.1 million dollars in two rounds of seed funding. Tech bro though he may be, something about Greg’s professional life feels oddly relatable, now. I wonder if this escape room doubles as an exit strategy.

We re-entered the front room. Company logos were slapped up on the far wall behind the desk, a not-so-humble brag by start-ups of their intellectual prowess and fun team off-sites. Adding your company’s sticker to the wall was the reward for successfully completing the escape room challenge on time. Bragging rights and permanent public recognition: a value prop perfectly attuned to the motivations of start-up employees.

Meg unzipped her purse and pulled out two red stickers. “One for me and one for you,” she said, fanning out the stickers in front of Michele. Michele, who worked at the same company as Meg, giggled as she reached out to take one of the Kintone-branded stickers. As Michele and Meg made their way to the wall to add Kintone’s name to the sticker monument, I had the eerie feeling that maybe we hadn’t escaped at all. ♦

Amanda Legge is the creator and publisher of the magazine. She grew up in the Bay Area and currently leads the Credit Design team at Nubank. Outside of work the only hobby she has is this magazine.