A look at racial inequality in the Bay Area using choropleth maps.

Hannah opens the door of the silver Honda Civic that has just pulled up in front of her Marina apartment. She ducks her head in to say hello and confirm her Uber driver’s name is José before climbing into the backseat. The car accelerates and Hannah hoists her Herschel backpack, a subtle LinkedIn logo engraved on the top, onto the seat next to her. She slips her Apple pods snuggly into her ears to listen to the latest episode of This American Life, while José navigates through the morning traffic towards her downtown office.

San Francisco is full of inconsistencies. People project empathy; they listen to podcasts on social justice issues and proudly advertise their Democratic votes in the last election. City dwellers champion global movements such as climate change and gay rights, yet they do not engage in promoting positive change at a local level.

Unbeknownst to Hannah, José has driven almost seventy miles today chauffeuring people around the city. San Francisco’s a hot market for riders and he’s hoping to score a few longer trips to the airport, which would bring his daily earnings to a grand total of eighty dollars.

Despite the intersection of Hannah and José’s lives, their stories leading up to this moment are quite different. Both were born in the U.S. in the late eighties, but Hannah grew up in Marin County, just north of San Francisco. Although she wasn’t the best student, she managed to graduate from a four-year college and launch her career at a local tech company. José was born to an immigrant family. His parents left El Salvador in the mid-eighties, fleeing civil war and government-sponsored violence in their home country. Aided by a cousin who had immigrated a few years before, José’s parents moved to Richmond, California. They settled in a Spanish-speaking refugee community and began working seasonal, labor-intensive jobs. As a teenager, José attended his neighborhood high school, but he left during his sophomore year to help his family earn money and support his younger sisters. After a series of odd jobs gardening and painting, he learned about Uber from a friend of his and signed up to be a driver.

Isn’t interesting how two people who grew up in the Bay Area, only 50 miles away from each other, have had such different life trajectories?

It’s not a coincidence. The problems of inequality in the Bay Area are rooted in place-based, racialized economic disparities. In fact, race, income, and geography are so deeply intertwined that I can accurately predict someone’s annual income knowing nothing but their five-digit zip code. Sadly, race—or rather, race and ethnicity, which includes cultural factors like nationality, ancestry, and language—happens to be an excellent predictor of zip code. That means that if I know your race, I can make an educated guess as to where you live, and if I know where you live, I can make a fairly accurate guess as to how much money you make.

What follows is a set of choropleths (colored maps) that document the reality of the stark racial-social divide in this city we call home. For these choropleths I have divided the Bay Area by census block, each containing between 2,000 and 8,000 people.

On a technical note, the data used in the creation of these graphs was collected from the 2017 American Community Survey, the most recent published edition. The US Census defines five races (White, Asian, African American, Pacific Islander, and American Indian) and two ethnicities (Hispanic/Latino and Not Hispanic/Latino). For the purpose of these graphs, I have created a new race, called “Hispanic,” which is composed of those that identify as Hispanic or Latino, regardless of race. Of our six defined races (White, Asian, African American, Pacific Islander, American Indian, and Hispanic), American Indian never qualifies as a majoritarian race in a Bay Area census block, so there are only five races represented in these graphs. The borders of the maps, although not always an exact representation of the Bay Area’s physical geography, correspond to the zip code boundaries drawn by the US Census. 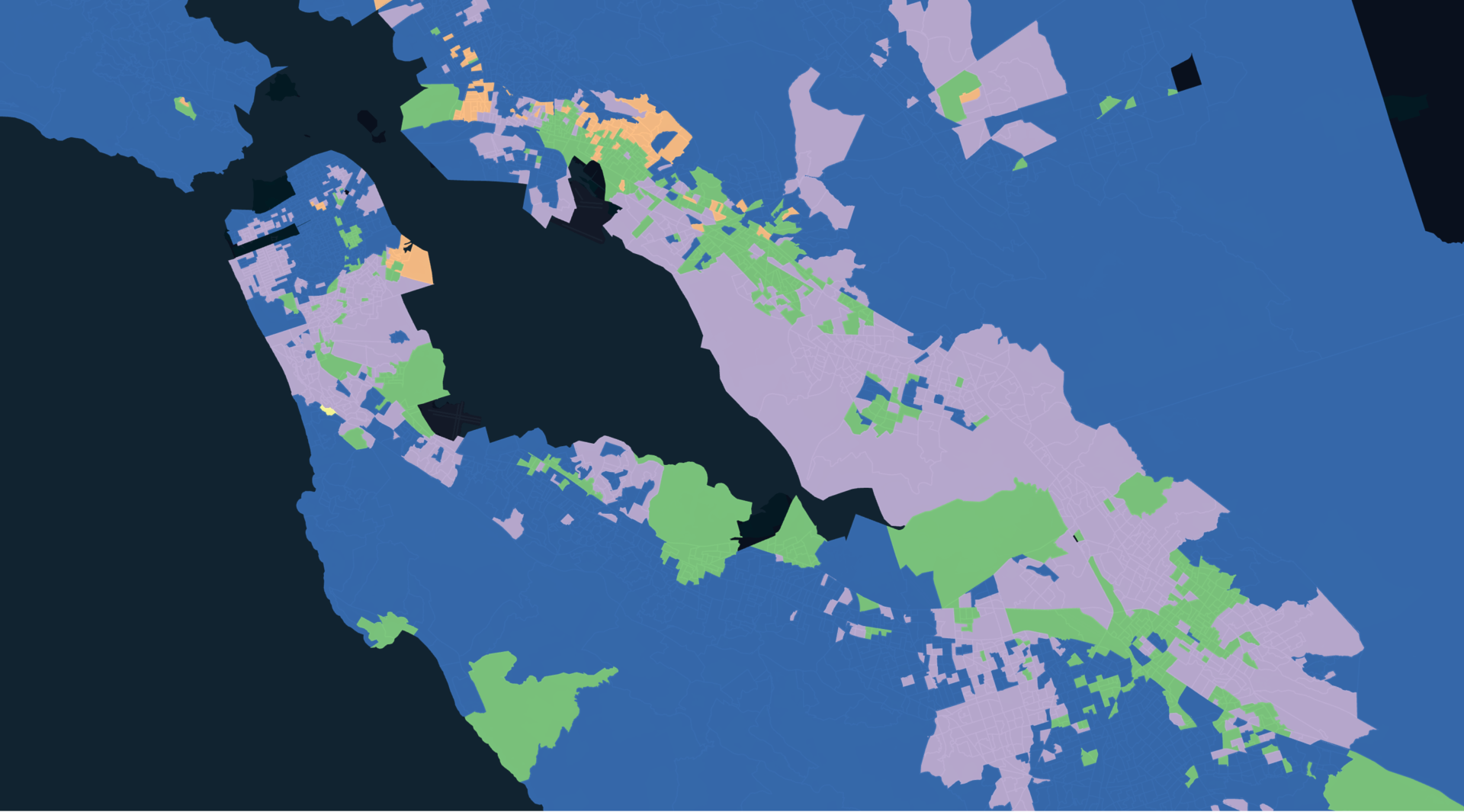 So what are we seeing here? White people (blue) dominate the geography with a noticeable Asian presence (purple). The Hispanic group (green) is present to a lesser degree than their Asian counterparts, and the African American population is practically non-existent (orange). If you look really closely, you can spot one small community of Pacific Islanders (yellow) just south of San Francisco in Pacifica. As I mentioned above, American Indians do not qualify as the majority race in any census block in the Bay Area.

In the white sea of the Bay Area, there is an Asian continent, a few small Hispanic islands, and a buoy of African Americans.

You can see racial clusters between neighboring census blocks. In other words, if you live in a majority white block, your neighbors down the street in another census block are also often white. If you look closely at the northern-most section of the East Bay, there is one single census block with a majority Asian population. That census block represents the UC Berkeley campus.

Other notable clusters of Asian concentrations on the northern tip of the peninsula, shown here in purple, include Chinatown, west San Francisco (the Richmond and Sunset neighborhoods), and the San Bruno area. Chinatown has been home to a large Asian community ever since the founding of San Francisco in the early 1800s. In those times, the bay’s water line reached past Sansome Street, and Chinatown formed the shoreline. 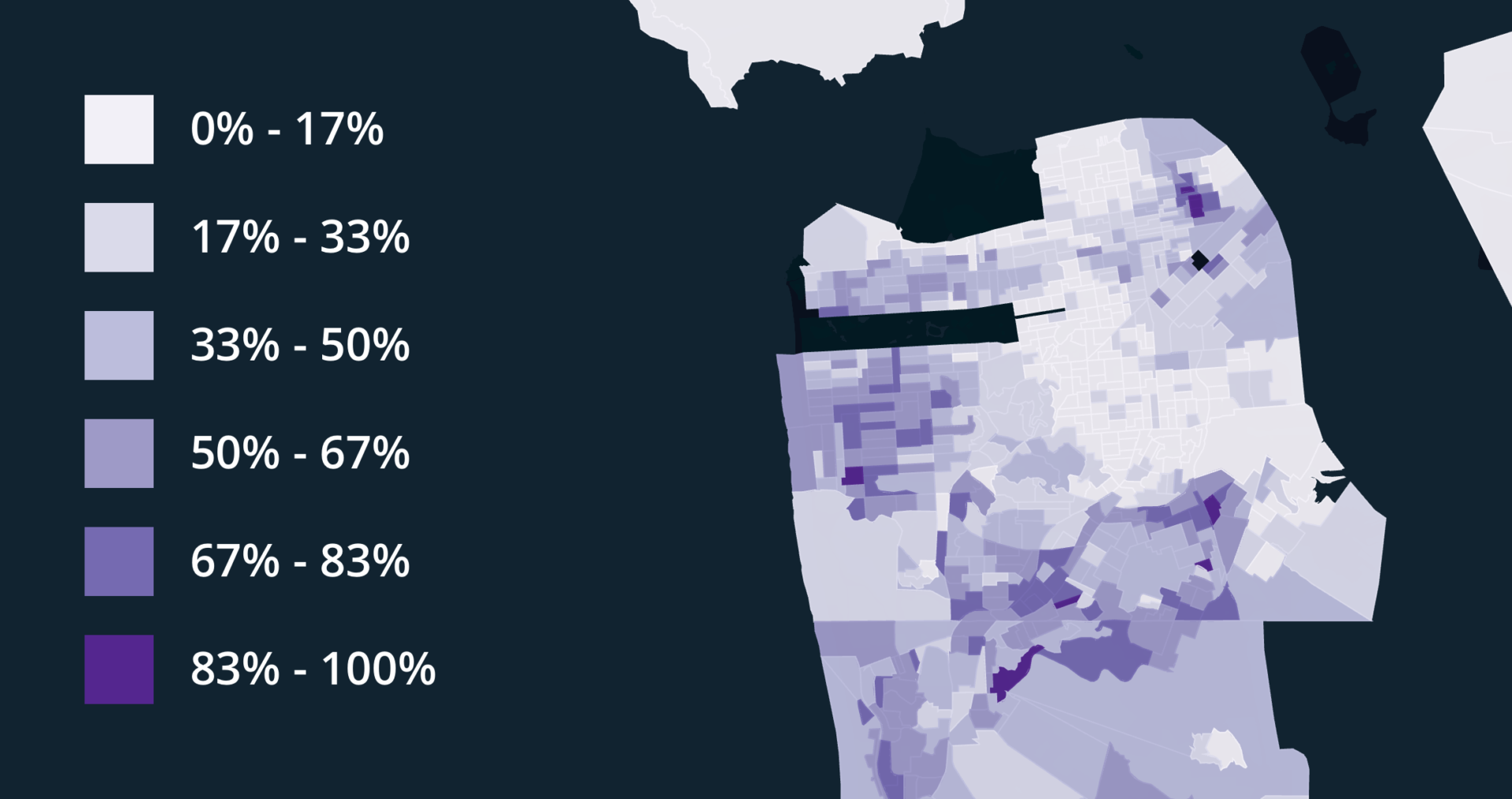 An “atento” reader may have also noticed La Misión as a Hispanic outpost. The Mission neighborhood is the only remaining San Francisco city section populated by a Hispanic majority (represented here in green). 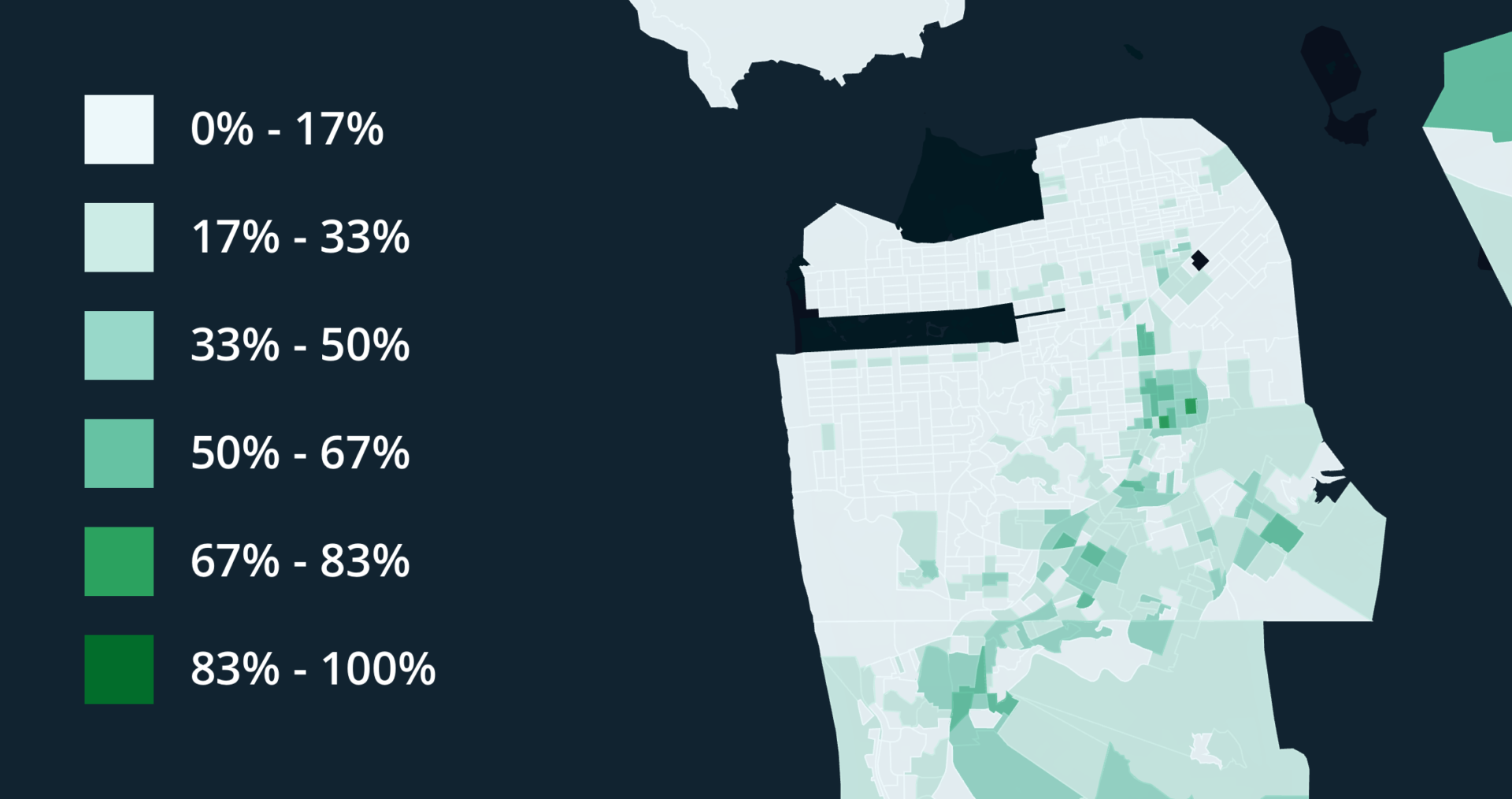 The African American population (orange) is scarce in San Francisco, and concentrated in the Western Addition and Bayview-Hunters Point neighborhoods. The history of housing and development in San Francisco offers us insight into these communities. The Western Addition underwent major development after WWII, when hundreds of Victorian-style homes and businesses were demolished in favor of modern, multi-story building projects. Though residents were promised a preferential unit in the new buildings, the area sat empty for years. Marketed now as an attempt at affordable housing, the area is simply referred to as “the projects.”

The data, however, allows us to see much more than just the majoritarian race per block. We can visualize totals, percentages, and even densities of each race. We can also visualize income, albeit at a slightly less granular level. 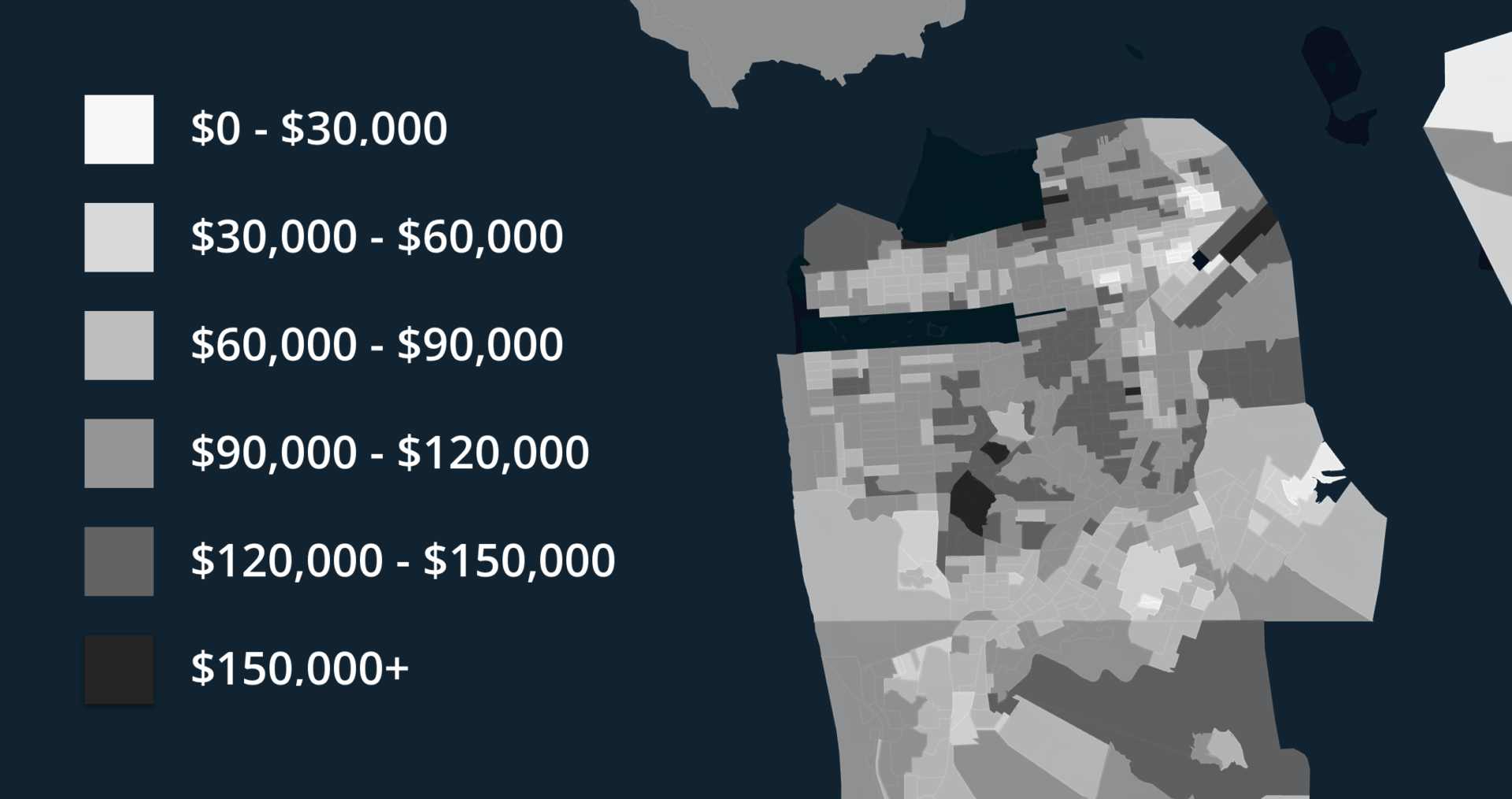 In these maps we see the tendency for higher income households to live in higher altitude zones. The poorer flats of the Mission neighborhood form a stark contrast against the climbing streets of rich Noe Valley. A bit further north, hilly areas including Laurel Heights, Presidio Heights, and Russian Hill also show pockets of high-income density.

Adding income to the visualization, we see an inverse relationship between average annual household income and Hispanic population density. 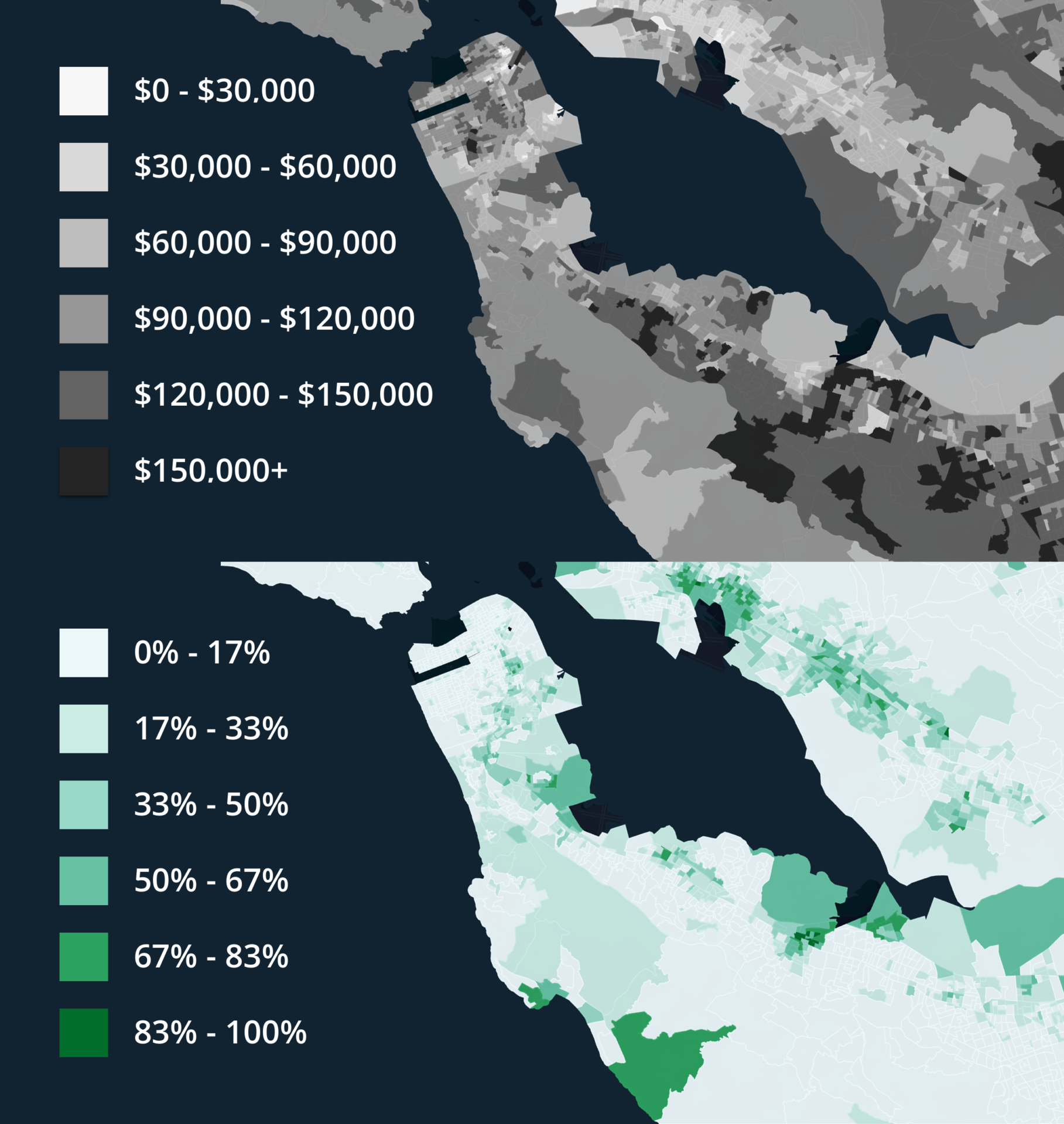 Society often asks us to see racial differences as nothing more than differences in visual appearances—to be colorblind. According to this data, however, the percentage of people allocated to racial groups in each census block is strongly correlated with income (p-value of less than .001 for both the Hispanic and African American predictors). In fact, using only the breakdown of racial groups by percentage in each census block, our model predicts over forty percent of the income variability (R-squared of 0.42). Opportunities, wealth, and access to resources are inequitably distributed based on race and geography. If we cannot see these disparities, we cannot address them. Western European countries like France and Germany have a policy of “generational reset,” meaning that the opportunities of a child born today will not be conditioned on the life their parents chose (or were forced) to have. Access to quality education and health care is universal, regard- less of an individual’s origin or financial resources. Social welfare policies like this aim to break the cycles of poverty and racial disparities to provide equal opportunity for everyone.

America is held up as a land of opportunity, but that seems to only hold true for particular races. Encouraging policies of generational reset goes against the capitalist instincts that this country was found- ed on, but I wonder what the choropleths would like if the Bay Area did just that. Who knows? Maybe Hannah and José’s kids would end up being colleagues one day. ♦

These maps were created using Kepler.gl, a map framework created by Uber.

Fernando San Martín is a data science specialist at The San Franciscan. His work has been featured in The Daily Mail, 20 Minutos, and Muy Interesante.