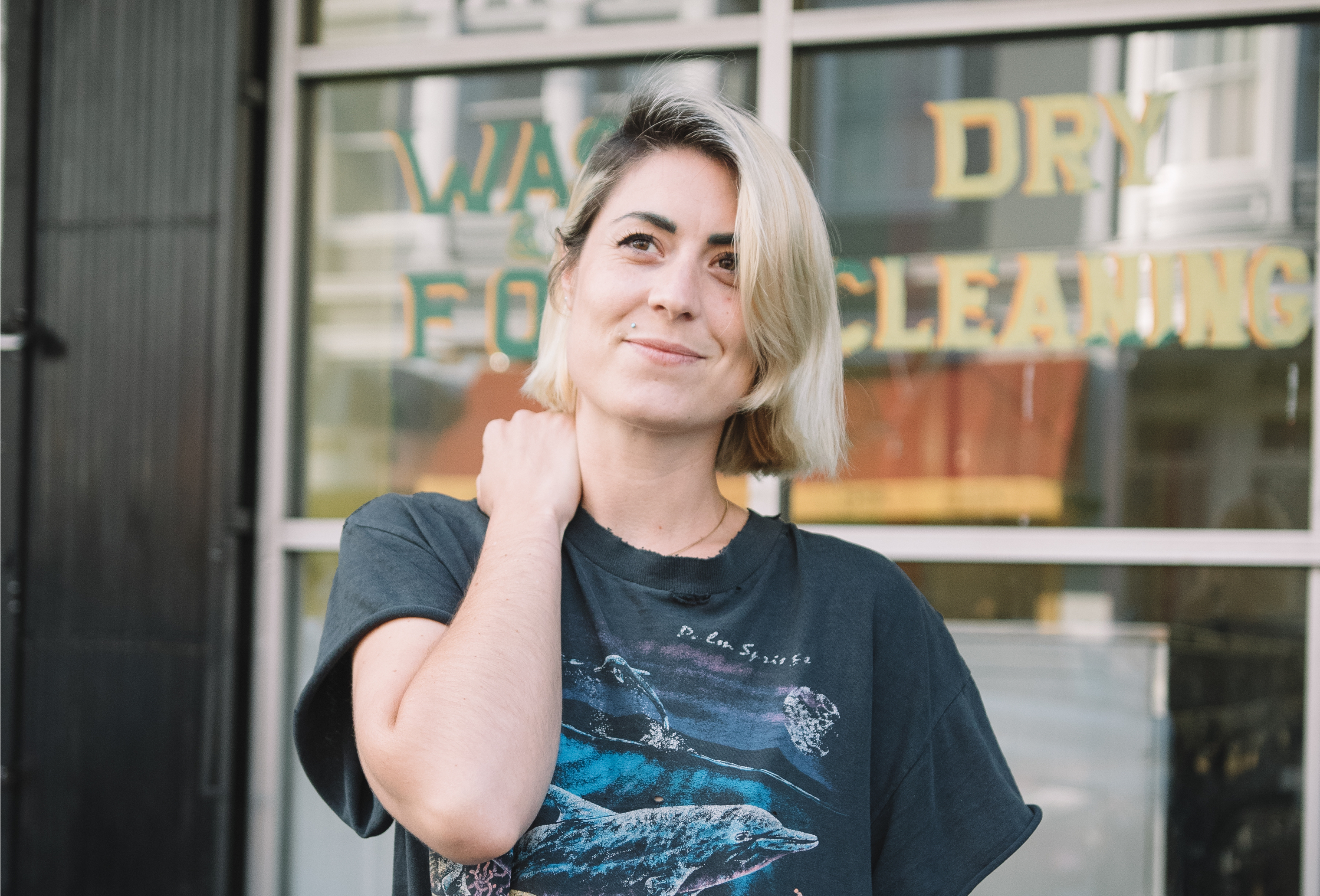 “Oakland based indie-pop with a soul.” A single line of description, ignored for years, yet still quietly relevant. After a slight look of embarrassment when asked about this forgotten tidbit on her Spotify profile, Emily Afton explained that the most important aspect of her art is being genuine to herself and letting go of external pressures. “It means not thinking, not making music with my head,” she said, between bites of Beauty’s bagels.

“I just think I have the makeup of an artist, it’s something that I kind of obsess over, and it makes me happy.”

Afton’s love of music started early. “I always thought I had great music taste, and I prided myself on that,” she said with a playful smile. “I loved finding new bands and felt very connected personally to the artists that I listened to growing up.” Afton now looks to establish that same connection with her listeners through her music, actions, and online presence.

Her dream of building a life as a musician took off seven years ago during a show in a small bay area arts space. After her performance, Afton was approached to record her song, “My Own One,” for an ad. Within a month the track was featured in a Nature Valley granola commercial. This spot gave Afton the confidence to dive headfirst into a career in music, fueling the effort that culminated in her 2016 album, Archetype.

With one album out and an EP on its way this summer, Emily has come a long way from her early performances, busking her way through college on Pacific Ave in Santa Cruz. I experienced one of her shows last fall in a cozy, dimly-lit SoMa loft, where Afton performed a moving arrangement of Frank Ocean’s “Thinkin Bout You.” She started with the background, looping and layering breathy, haunting vocals, immersing the audience in sound. On the verses, her voice simmered with a comforting huskiness—almost as if singing through a San Francisco fog—before springing forward into the highs of the chorus. She had the crowd speechless at first and then singing along as if huddled around a campfire.

Afton, no stranger to small intimate shows, has also captivated large crowds. At the 2017 Women’s March in San Francisco, she performed for an estimated forty thousand people. She finished her feature track the night before, an angsty protest anthem with the demands: “Keep your hands off of me / Try and grab us, we’ll take you down.” For Afton, “the emotional part was that people really resonated with the lyrics.” As an affirmation of this, her performance ended in raucous applause.

Afton’s “Archetype” album, and her track “Lost,” featured on an episode of the hit show “Riverdale,” have the quality of being at once dreamy and introspective, wistful, yet purposeful. A more recent single, “Back in San Francisco,” contrasts Emily’s reflective vocal style with a sunny, upbeat tone. Backed by garage-rock style guitar riffs and defiant pop hooks, this latest release sounds like a love song, but is just as much about the strange feeling of a changing city. The chorus begins: “I usually wear my heart on my sleeve, but now I got just a chip on my shoulder.” She hints at a lost love, but dances around it with faded, joyful vocals, and a beat that would make anyone move. This version of Afton is both longing and aloof, a difficult duality to hold, but one that leaves us with a fun and complex single. “Back in San Francisco” gives us a taste of Afton’s upcoming 2019 EP, recorded at Oakland-based nonprofit studio, Zoo Labs, after her 2017 residency. The core of the new project is the duo of Emily Afton and drummer/co-producer Patrick Aguirre, but many local artists took part in its creation. “We’re so lucky that the Bay Area is just bursting with talented musicians,” Afton said. The resources and environment provided by Zoo Labs gave Afton a home base and plenty of inspiration. “Every time I walk through the door I feel like I am becoming a better musician and know my place as an artist in the world a little better,” she said.

A major influence on Afton’s work is Fiona Apple, another singer-songwriter who writes love songs with an empowered female identity. Much of Afton’s work has taken that tone, telling intricate stories as a way to break stereotypes and inspire other young women.

“I think society has demeaned women down to being simple, and I think it’s a feminist cause to complicate the female identity.”

Afton’s actions speak to a connection with larger movements. Her performance at the women’s march was a moment of validation for her as a singer and as an advocate for the cause. More recently, Afton released a single, “Sylvia,” in honor of Sylvia Rivera—LGBTQ activist known for the Stonewall Riots and founding multiple groups championing LGBTQ rights. Afton donated a portion of the proceeds to the New York Anti Violence Project and used her social media platform to publicize the initiative.

Scrolling through Afton’s Instagram, it’s not difficult to find posts urging action and awareness on many important issues, but that is not where her focus lies as an artist. Afton is a great admirer of artists like Madame Gandhi—a collaborator of Afton’s who treats art and activism as one and the same, fully embodying both missions in her work. For Afton, however, activism has been more a product of a caring spirit and a commitment to her values than anything else. Truly authentic activism requires, in her words, “being about it, not just talking about it.” From Afton’s perspective, “We all need to challenge ourselves to do more, but do it in a really genuine way.”

Social media has amplified the “talking about it” part—regardless of authenticity. Afton takes advantage of her platform as most modern artists must, but values social media most for the direct connection it provides with her listeners. Instagram has given her the ability to take people along on her journey, providing a window into her life and creative process. It’s a strange experience to have one’s life on display. It can feel like a constant performance. Yet to audiences, direct online engagement with an artist often feels more organic than any traditional marketing effort.

In one of Afton’s most liked and shared videos, she christens her home studio with a sultry cover of a Billie Eilish track, her vocals augmented by a self-harmonizer. Numerous other videos on her Instagram show her practicing new music or just playing around with sound. By bringing us into the studio with her, Afton makes her audience feel like part of the process and creates a much more intimate relationship. As our interactions with artists become more abundant and multifaceted, the social media presence of artists has an increasing influence on our experience of their music. The pinnacle of this shift can be seen in the dazzling ascent of Cardi B—clearly a talented musician—but was it her music that gained her 10 million Instagram followers before even releasing an album? Afton credits Cardi’s staying true to her magnetic character. “She just has a big personality that she lets fly on her Instagram and that is a beautiful thing,” Afton said. “People want to see her succeed because they feel like they know her.” The same could be said of Emily. Know her, and you will root for her.

For Emily, likeability and social media acumen is just a means to an end. In her words, “Artists should all have an obligation to ask, ‘Why are we doing this’?” She is clear: she strives to be a creative force in our lives, propelled by a love of music and a story to tell. “Music is like having a magical superpower where you get to move people in a way that you can’t with other jobs,” Afton said, by now having finished her bagel. “It’s a huge privilege.” ♦

David Sasson, a regular contributor to the magazine, is a Bay Area native with boundless enthusiasm for live music. He’s been organizing living room concerts since 2015 and can typically be found at a local concert venue. When not immersed in sound, he works in creative technology and is purposefully vague about what that means.